Every TypeScript example and tutorial I have found thus far is about language features, Static typing, Visual Studio, etc. I cannot find anything to tell me how I should be using it with reference to JavaScript and the DOM.

My understanding it you can use TypeScript for the DOM. But, I never see anyone using it for that.

Said johnny in a question on stackoverflow.com. A while back I had the same question. Can We Use Typescript to manipulate the DOM?

Hello world! I’ve been learning Typescript for a week now. I got into typescript when I wanted to learn the new Angular. Since it is based on Typescript, I decided to learn Typescript. During learning, I found it odd that none of the learning aids I used included examples of using the language with HTML. Every example I saw in those learning aids and some other tutorials I then looked up involved only node.js. More googling landed me on StackOverflow where johnny, as I mentioned before, had the same question. using this as an opportunity to make a post after almost a year, I’ve made this post, the missing piece of the puzzle, in hopes that it would land first instead of johnny’s question on StackOverflow.

Using the DOM or Dom manipulation in typescript is simple. All I needed to do was to use the types defined specifically for DOM access that is available in Typescript. The rest was the same as in JavaScript. But… these “DOM types” are not available out of the box with Typescript. I needed to explicitly configure the typescript compiler to include the “dom” library in the compilerOptions section in the configuration file[2] to access the DOM types in my project. “Why didn’t they include by default?. Maybe the creators didn’t intend to use it primarily for front end development” I thought to myself.

Some other configuration changes I made were: I enabled strict mode for strict type checking and I changed the target from “common JS” to “es5”, so the compiler can output JS for browsers and not for node.js. I also added the “es2015” library so that I could use functionalities like arrays and Math functions for my example.

I’ll begin with the basics where I change the inner text value of an existing element. I started by creating an HTML file with a simple html5 boilerplate with a <h1> element with id greeter saying “hello” inside the body.

Then, I opened a new typescript file and added the following code

When I compiled the code with the command

It threw the following error

Type ‘null’ is not assignable to type ‘HTMLHeadingElement’.

Bummer! My first attempt failed. On the bright side, Typescript is doing its job and the configurations I set up works. The error means that, I tried to assign greeter which is of type HTMLHeadingElement with an object of type HTMLElement that the method getElementById returned. HTMLElement | null in the error message means that the method’s return value can be either of type HTMLElement or null. The special operator | is called the union operator. I won’t be explaining “union types” in this article. You can learn about them here.

HTMLElement type is just a common interface for all the html elements[1] but the compiler expects a HTMLHeadingElement. I thought of changing the greeter variable’s type to HTMLElement but I didn’t. Because, it’s not right. If I had changed it to HTMLElement, it means greeter could accept any HTML element from the DOM. I wanted it to accept only a heading element. So, I used type assertion feature of typescript (Learn about type assertion here) to tell the compiler that the element returned from the getElementById is indeed a heading element and it doesn’t have to worry about it. Here’s the fixed code:

Now, the compilation was a success. I included the script.js file generated by the compiler in the Html document and opened it on a browser. It looked like this: 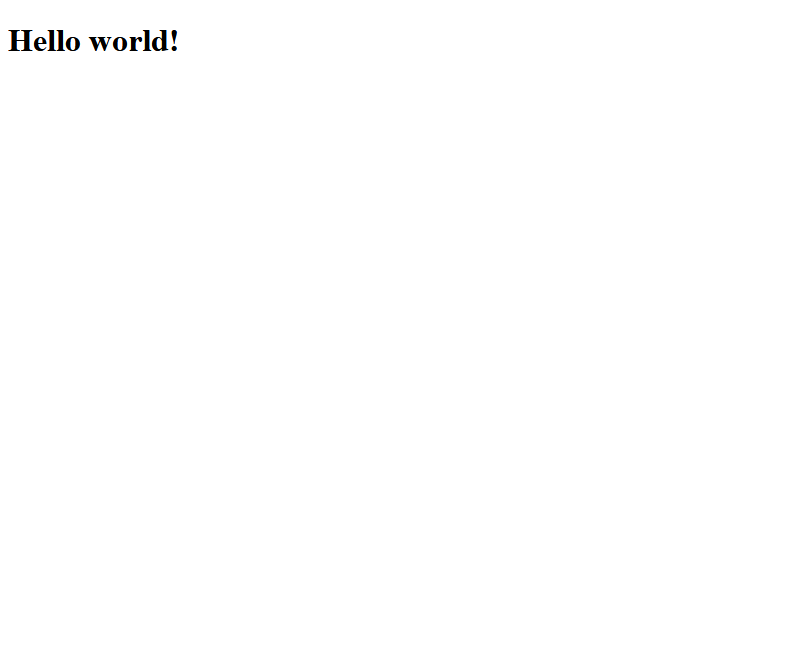 Now that I’ve made sure that everything works as intended, It was time to decorate the page. I wanted a font style that is not formal looking. After browsing through google fonts, I chose Rock Salt. I imported it in my stylesheet along with Dancing Script as a secondary font using CSS imports. I then proceeded by adding a few more elements to the Html document. I centered all the text using CSS flexbox, added a nice background from UI gradients, and adjusted positions of some elements to arrange them properly. The page now looked beautiful. 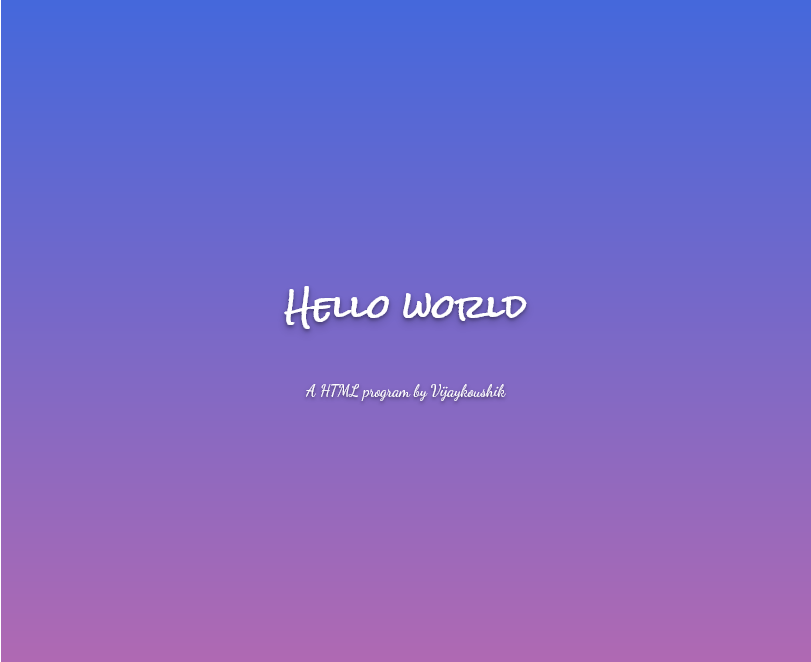 Next, to place the cherry on top, I wanted to add a pretty background animation of orbs rising to the top like bubbles to the page. To make the orbs I decided to use <div> elements. Since I wanted several of these orbs with different sizes, I split the task into two so the work could be simplified. One, I created a common style for all the orbs and created a custom animation for the orbs in CSS. And two, I created the orbs dynamically with the help of typescript by creating a set number of <div> elements, assigning them the style created beforehand and randomizing their sizes, positions, and animation-delay to make them look more natural.

Finally, I added the orbs to the dom like this and thereby kickstarting the animation

And the link to the repo containing the complete code

During writing this article and the example, I realized the involvement of advanced concepts like type assertion and union types. I now understand why the authors of those tutorials didn’t include them. If included, it would have confused beginners outright. I think it’s best to learn typescript well before starting to use DOM in your projects.

In my example, I skipped the null checking when I fixed the type mismatch error as it seemed unnecessary for the example but you should check for nulls when necessary to avoid breaking your app at runtime. I also skipped the part where I added animations using the animate.css plugin for the text as it felt trivial explaining it.

Finally, I need to thank Ivan Petrov for suggesting me to read a book when learning a new tech in a comment on my previous post on https://dev.to. Thanks, Ivan 👍🏽. The exercises in the book helped me.

Thanks for your time. :)